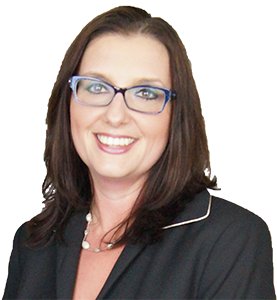 Attorney O’Brien focuses her practice on Civil Litigation, Estate Planning and Administration, Property, and Family Law Matters, including custody and divorce, as well as support matters.

At Duquesne, Attorney O’Brien graduated with honors, receiving the CALI Award for Excellence in Business Planning. She also worked as an advocate for Duquesne’s Economic and Community Development Clinic, assisting and promoting the development of various Non-Profit organizations in the Pittsburgh region. She was also involved in the Trial Advocacy Program and completed an internship as a law clerk with Westmoreland County Court of Common Pleas Judge, Gary P. Caruso.

Attorney O’Brien was first employed as a legal assistant at the firm in 2001, became an associate in October 2003, and was named a partner when the firm changed its name from The Proden Law Firm, LLC, to Proden & O’Brien, Attorneys at Law, in 2013.

Attorney O’Brien resides in Uniontown, Fayette County, with her husband and three children. She is active with her children’s many sporting activities. She is also active in the community, having served as President of the Uniontown-Chestnut Ridge Rotary Club from 2012-2013, and is a current Member of the Board of Directors for the Fayette County Bar Association. In 2016, she was named the first female to serve as a Member of the Board of Directors for Fayette EMS, a position she continues to hold today.

Feel free to keep in touch on any of our social media links below.